And the Winners Are…

Posted Nov 9, 2012
in Blog
We want to send out a huge “thank you” to everyone who participated in our Shelter Sweethearts Photo Contest! We’ve chosen 6 winners and are preparing to give $10,000 to shelters and rescues. Whether you submitted a photo or simply voted, we greatly appreciate your participation and your help in making the contest a success.

Even if your local pet shelter or rescue didn’t win a donation through our contest, you can still help them out by promoting the “give local” message in your community. Volunteer your time or donate what you can, and make sure that others know to do so as well. Many people give to national groups like the Humane Society of the United States but don’t know that little of the money, if any, will make it to their local shelter. With your help, pet shelters and rescues can have the resources they need to continue their important hands-on work. 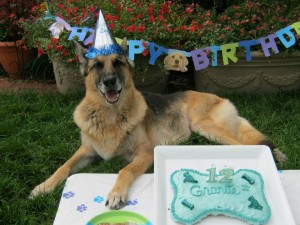 Granite came to me at the age of 10 weeks via a rescue friend who asked me to foster him for a 2 week time period. Needless to say as you can see in Granite’s photo he recently celebrated his 12th birthday with me and I am a foster failure. I chose Heidi’s Legacy after reading the story of their namesake. — Christine K. 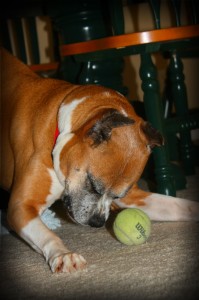 Sugar was in and out of a kill shelter most of her life. Her first visit was at 7 months where she was adopted. Several times in between then and 11 years old she was found as a stray, and was returned to her family. Days before Sugar’s 11th birthday she had her last trip to the shelter, this time being surrendered by her family because they were moving. The Vice President of Florida Boxer Rescue visited Sugar at the kill shelter. This girl, although already 11 years old, perked up and gave her the “take me home” eyes. At this shelter she was not going to make it to the adoption floor. Several lumps covering her body, a UTI and her age were all factors in this decision. I immediately said there is no way she is having her last day be in a cold, scary shelter, so I took her in. — Danielle S. 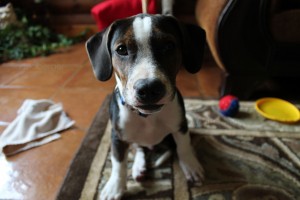 I adopted Boone, a Dachshund/Coonhoud mix, from Honor Animal Rescue when he was around 3 months old. He has 3 cat brothers which has made him believe that he, himself is a cat. Unlike our cats, he loves car rides more than anything in the world. He is a very sweet dog, always ready to play with anyone and greet them with lots of kisses! — Caitlin S. 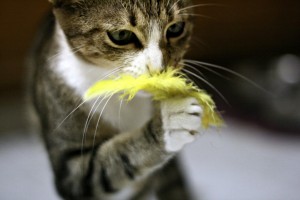 Buddy was my foster that I got in July and he was just adopted last week. He was found almost dead under a car by a couple of college boys. They took him home, put him in their yard to start feeding him and to look for a place for him to go. They found Charm City Animal Rescue who agreed to take him. Buddy was a rescue favorite, most lovable playful awesome cat. His favorite toys are feathers, which is why I choose that particular picture. — Melissa W. 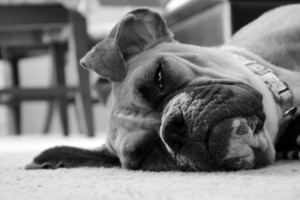 Maddie, a one-year-old female boxer, was in the Logan County, West Virginia animal shelter. This shelter has virtually no funding and zero help. She got very ill and was near death when we got her, weighing 27 pounds, had gashes in her ears, demodex, coccidia, eye infections, ear infections, and staph skin infections. After two weeks of care she weighed in at 40 pounds, and after one month she was a nearly-healthy 54 pounds and her ear sore was completely cleared. From day one, Maddie has been an inspiration to me. By the time she left us she was playfully terrorizing my boxer, “Cash,” and chasing us around the house playing tag. We got her housetrained and crate-trained and she found a forever home last Monday (my birthday). Her forever family consists of a little schnauzer mix Franco, a 7 month old baby, and two wonderful adult parents. — Jessica C. 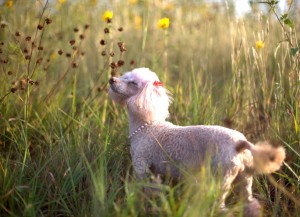 Lana, a miniature poodle, spent the first 12 years of her life as a breeder in a puppy mill. She was rescued and taken in by the Cowley County Humane Society in Kansas. Lana didn’t do well in the shelter environment, so the staff asked us if we would foster her. She was in bad shape, physically and mentally. The shelter had shorn her matted fur and taken care of her, but she was still very skinny and had various ailments. She was also afraid of people and didn’t know how to be a dog. When nobody had adopted Lana after six months, we decided to make her part of the family. That was three years ago, and she grew to be a healthy, happy and loyal dog. She is the fanciest dog in town with her poodle hairdos, loves attention, and is a favorite at the veteran’s home which we visit every week. — Alice S.