Why We Don’t Raise Money from You 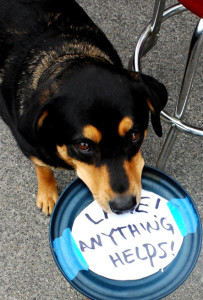 We receive many emails from readers asking how they can donate to us. Our response is this: Please don’t give to us, but support your local shelter instead with supplies, money, or volunteer time. You can use our shelter locator to find groups near you.

Our main goal here at the Humane Society for Shelter Pets is to clear up the confusion that exists among the public about national and local humane groups, and to ask people to support their local shelters. According to public polling, most people mistakenly believe that national groups like the Humane Society of the United States function as umbrella groups for similarly named local humane societies. A lot of money winds up going to national groups when the donors think their money is going to local their local humane society or SPCA.

Frankly, we could run into this same problem if we were to start fundraising from the general public. It’s simpler and easier—and less confusing—for us to tell folks to simply donate directly to a local group.

Another concern is the cost of fundraising. According to CharityWatch, the Humane Society of the United States spends up to 48 cents of every dollar it raises on fundraising costs. That’s terribly inefficient, but it’s a reason you might see HSUS commercials around a lot–and a big part of the reason why there is so much confusion about national and local groups.

We want to spend as much of our budget on programs as possible—getting the word out about supporting local shelters—so starting a direct mail program or expensive ad campaign isn’t a feasible option for us.

The bottom line is this: if you want to support us, the best thing you can do is provide support for your local shelter and encourage others to do the same thing.