And the Photo Contest Winners Are…

Posted Jul 31, 2013
in Blog
We want to send out a huge “thank you” to everyone who participated in our Shelter Sweethearts Photo Contest! We’ve chosen 6 winners and are preparing to send checks totaling $8,000 to shelters and rescues. Whether you submitted a photo or simply voted, we greatly appreciate your participation and your help in making the contest a success.

Even if your local pet shelter or rescue didn’t win a donation through our contest, you can still help them out by promoting the “give local” message in your community. Volunteer your time or donate what you can, and make sure that others know to do so as well. Many people give to national groups like the Humane Society of the United States but don’t know that little of the money, if any, will make it to their local shelter. With your help, pet shelters and rescues can have the resources they need to continue their important hands-on work. 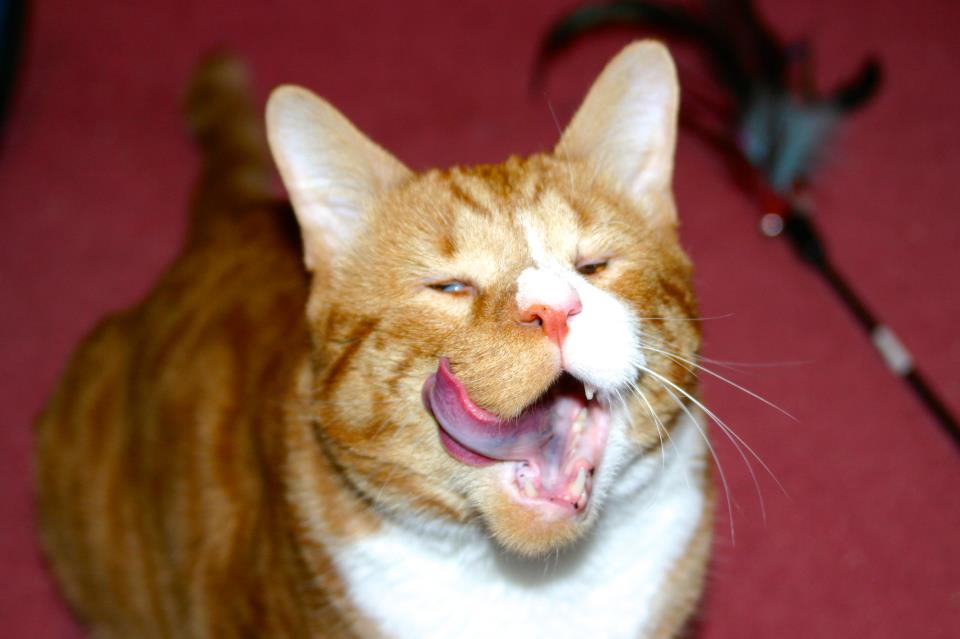 About Mr. Magoo: Mr. Magoo is a 2 1/2 year old blind specially-abled cat that we rescued from euthanasia in October 2012. Magoo was picked up by animal control as a stray wandering the streets of Philadelphia. Unfortunately with him being sick and blind his time was up.

Magoo is adventurous, loving and so full of life, he never let’s his blindness hold him back or get in his way.  Magoo has become an animal advocate for specially-abled animals and raises awareness and funds to help other animals like himself. His mission is helping others to understand that Specially-abled animals are no different than other pets, they just need love, compassion and a place to home. Paying it forward wasn’t an option it essential. We fell in love with his face, but he has truly stolen our hearts. — Colleen K. 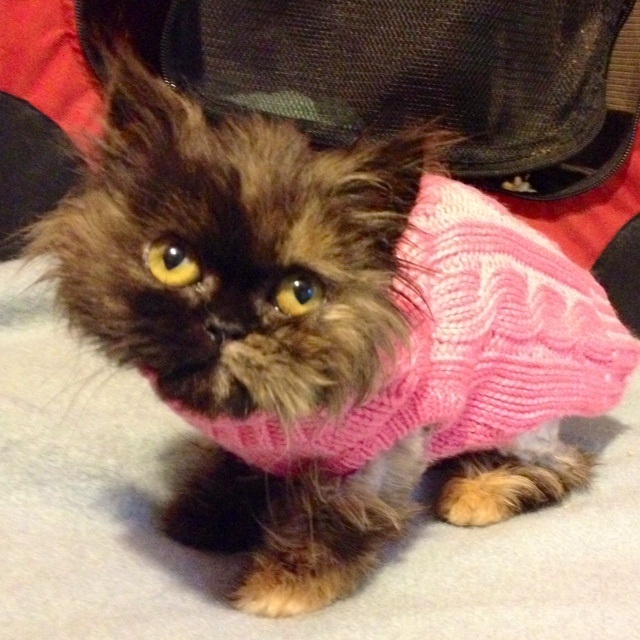 About Freida: Freida was found in a ditch on April 10, 2013 one mile from anywhere…a certain throw away kitty.  She was emaciated and matted and weighed less than 2 lbs.  She did not walk to that ditch by herself.  Thank God for the man taking a walk that day.  He saved her life.

Freida was scared.  We took her to the vet who was a perplexed as we were at the matted kitty with two wide eyes starring up at us as if to say, “Help me.”  The vet had to shave her and due to her lack of body fat Freida began wearing sweaters to keep warm.

After much testing and many exams by vets and specialists we do know that Freida has food processing issues, liver and gallbladder issues and battles with chronic infection.  Her white blood cell count remains off the charts.

Now in a good home with the proper care, good food and lots of love Freida is a happy, well adjusted 2.5 lbs. cat.  She gets tired very easily due to her anemia but she loves to sun herself and be with humans.  She travels well and gets to visit many places in her pink strollers and carriers.  Freida is a happy kitty with her own website:  www.facebook.com/FreidaTheThrowAwayKitty.  Our hope for Freida is that she can have quality of life for no matter how long that may be and also bring to light the plight of the homeless, abandoned and stray cats everywhere. –Ann

About Obie: Obie, a 77lb dachshund, came to me after a plea for help was shared on social media pages.  He had been overfed by his elderly owners to the point that he could no longer even walk. His new life involved a diet makeover and he began to lose weight and inspire people world wide as his Facebook page, Biggest Loser Doxie Edition, gained nearly 100K supporters.  Obie absolutely loves people. He has the most unique personality and is very sociable.  He lives with Nora, brothers Noggin, a dachshund and Hunter, a Labrador.  To date, he has lost 48lbs and continues to bring awareness to the effects of obesity on animals and people all over the world.   –Nora

About Sweet Sadie: Sweet Sadie was found as a stray with a severely broken jaw.  She went in for emergency surgery that same day and we found it had been left so long she had formed a bad infection which required several strong antibiotics.  It took her weeks to heal, but during that time she showed her loving side.  She wiggled her way around the vets office and would sit, shake, and wait for a treat!  Once healed, she moved into a loving foster home that has taken great care of her.  We cannot imagine what happened to this girl’s jaw, but we know that she has learned to love people once again.  This girl has wiggled her way into my heart, and I know she will wiggle her way into the hearts of everyone else! — Danielle S.

About Fluffy Shark: We got Fluffy Shark when he was 2 months old.  This little guy is a miracle.  He parents were 7 month old brother and sister.  Panda Paws Rescue was contacted about them and took them in and had an emergency C section performed on the mom. Fluffy Shark’s three sisters died at birth, and he was not breathing.  Amanda Giese from Panda Paws Rescue had to perform CPR and breath for him for 10 minutes.  His mom then rejected him so Amanda had to become his “mommy”  She cared for him 24/7.  Finger feeding him, nurturing him, and loving him. Fluffy Shark was a miracle every day that he survived.  He wasn’t supposed to get over 2 pounds and was thought to be slow for his circumstances. We fell in love with him and applied for adoption.  Needless to say she picked us.  We love him so much.  Fluffy Shark is a model for our pet business www.doodlebugduds.com and he has raised over $10,000 for Panda Paws Rescue from his paintings.  He is now 8 months old, 6 pounds of pure muscle and fluff, and loves life. He is pure entertainment from the time he wakes up.  We love this little guy with all of our hearts. –Patty

Roo is a beautiful girl with a BIG personality.  She is loving and friendly, and has a happy disposition even though she has been in boarding for quite a long time.  Roo would love to have an active owner – someone who needs an exercise buddy, someone to jog with and go on long walks with, as she is full of energy.  She is also smart and fearless – definitely try her in agility – we think she’d love it!  She is picky about her canine friends.  She is definitely a dominant personality to other dogs, so the BEST home for her would be one where she could be the only dog.   We know her perfect home is looking for her right now!