Marshal Donations at Your Office 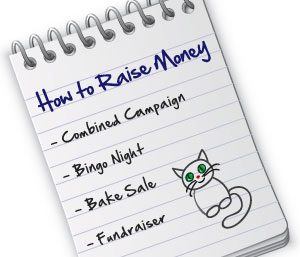 Ever received a “combined giving” packet at work? Many companies offer employees a chance to give at the office. Non governmental charities such as United Way can receive your donations through your employers payroll accounting. It’s also possible that local 501(c)(3) groups are included among your choices, so you may be able to help your local rescue or shelter just by checking a box. “I gave at the office” can be a literal statement.

However, if your favorite animal rescue group is not on the list there are two things you can do. First, you can get application details from your human resources department and pass them on to your favorite group and catch them next year. Or you can look through the list of programs on your list for one that will indirectly assist animals in need.

Consider Weis Markets. This grocery chain is doing an adoption drive in May called “Paws for Pets” in which shoppers can donate litter, toys, treats, and other supplies (or money) that will be distributed to local shelters.

The Humane Society of the United States gives only 1% of donations to rescues and shelters. So you may be able to support your local shelters through programs like Weiss Markets Paws for Pets every May by buying pet related items while you are shopping. Weiss Markets will deliver them to needy groups at the end of the month.

Maddie’s Fund and PetSmart Charities may appear on your combined giving list. These groups offer grants to animal rescue groups. In fact, PetSmart Charities has provided over $100 million in support to animal groups making it the largest funder of animal welfare efforts in North America. In the Baltimore area the Snyder Foundation for Animals does the same. Many charitable trusts grant monies to qualified groups including animal rescues, such as the Scott Trust.

There are many ways to support your local homeless animals through adoption or donating time, supplies or money. Only 4 to 6 million animals are requiring sheltering in a year, down from estimates just ten years ago of over 14 million. With your help, this is a solvable problem. Remember, don’t send money to us. Direct it to your local animal rescue group or charities that will actually give it to the animals in hands on care.